I love stumbling upon obscure pieces of history, and the survival of parish boundary markers is one of my favourites. This is partly because they can be virtually anywhere: beneath your feet, at eye level or much higher. They were used to mark the physical boundaries of a parish, so were important for land ownership and rents as well as the sense of belonging for parishioners.

Each year the parish officers would promenade round the parish to check the makers were still in place and legible, to correct encroachments. There were instances of buildings being erected over the boundaries, so they had to march though bedrooms and even out houses. In some towns, the boundaries could run down the middle of a river, so the procession would go in part by boat. If those involved had already had a drink or two to keep them warm, this could descend into farce, and even danger as boats could become overloaded.

The practice was carried out int he countryside where fields were also blessed in the hope of a fruitful harvest, a practice widely condemned after The Reformation as superstitious nonsense so largely died out. Many communities have begun to revive walking or beating the bounds as an annual event for communities.

For anyone visiting any town or city with ancient roots, they are worth looking out for. They generally indicate the name of the parish, and the number of the site. Here’s a few survivors from Bristol.

This is on a modern building in Tower Lane, the boundary between St John whose church survives.

These are two that can be seen in the arcade at the rear of St Nicholas’s market house. The St Nicholas parish markers are clear, but also several other parishes markers as the building was huge and involved the purchase of land from other parishes, or owned by them.

This is another St Nicholas marker, in Exchange Alley, possibly from the butchers’ part of the outdoor market

This is the best preserved pair, the boundary of Christ Church and St John the Baptist again. 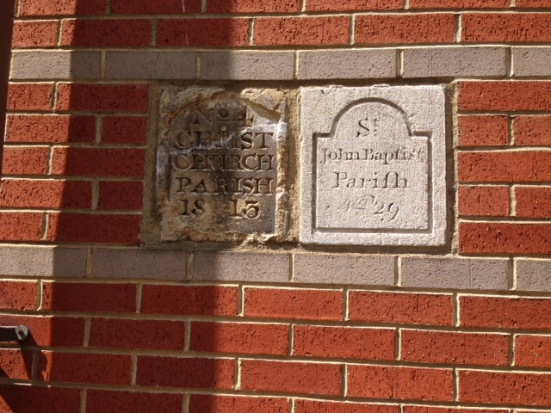 This shows that the stones are still recognised: this is the base of the statue of King William III in Queen Square so this was included, though now being eroded, and though in a very prominent place, few people notice what is beneath their feet.