On 24 September 2018 I published the following books. They are all available through Amazon and usual outlets or you can order them from any physical bookshop.

For bulk orders or commercial enquiries please contact me on curioushistorian@outlook.com

In the late 18th century, the French claimed that any Englishman tired of his wife could dispose of her at London’s Smithfield beast market. Examples can be found scattered through press records. Some were – as often claimed – brutal, sometimes drunken affairs. But they varied widely over time, practice, and practice. England was the only Protestant nation to retain its Pre-Reformation ban on divorce. Marriage continued to be easily entered into, but was impossible for all but the very rich to escape. Sales took many forms in an attempt to ensure their legality, and a range of rituals were often included, the most infamous of which involved the woman wearing a halter.

This book is about the nature of marriage itself, of what it meant to our ancestors, of how the public responded to domestic disputes and about the rights of women and children. Women became legally invisible when they married, but that did not mean they were powerless. They featured in many riots, especially over food, as the poet Robert Southey claimed they were more liable to be rebellious as they were unlikely to be prosecuted.

Some sales were initiated by women, who were often nameless but appear as intelligent, opinionated and who knew their rights. There were many men and women who believed there was an alternative to an unhappy marriage, with the only exit via death of one of them.

In 1733 Mr Henry Bridges announced his Microcosm  or Little World, was on display in Waltham Abbey before it toured Britain and the American colonies. It was a giant four tiered machine which demonstrated his world at the time, with the finest art, technology, architecture, music and astronomy. Henry’s story shows the links between religion, magic, science and cabinets of curiosities. It takes us into the worlds of travelling shows, quacks, medicine, engineering, science and freemasonry and the Longitude Prize. When Mr Bridges built his machine, Britain was a backward archipelago on the edge of Europe; by the time it vanished she was building the world’s largest empire, almost by accident. This story bridges those two worlds, shows how this was achieved via social skills, education and entertainment. It is about how knowledge and skills were learned and freely shared. Henry claimed his machine showed the difference between the old and the new worlds. His world likewise provides us with an insight into the world we have lost and which provides important lessons for our modern world.

Here’s a review by Milo Boyd from the Epping Forest Guardian, which covers Henry’s home town of Waltham Abbey: 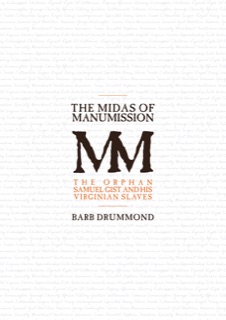 Samuel Gist was born in Bristol in 1714 but was soon orphaned and sent to Virginia as an apprentice to a shopkeeper. Despite this unpromising start, he became a successful tobacco merchant and was in business with George Washington and others. When he returned to Britain before the War of Independence he thrived as a stock broker and in marine insurance. when he died in 1815 he left legacies to many charities, and funded the freeing of his Virginian slaves, which became one of the largest manumissions in history.

Gist was an enigmatic character. His Midas-like acquisition of wealth contrasts with the praise from his slaves who spoke fondly of him and his daughters. Yet he pursued his former colonial neighbours for the smallest of wartime debts.

This story describes how Britain’s North American colonies were founded, how kidnapping and spiriting away of children led to indentured servitude and how white slavery preceded the infamous African trade. It is about the Atlantic world, and the commerce that it generated. But it is also about how an orphan rose from adversity to great wealth and to leave many large legacies.