I discovered these lovely almshouses by accident and they are not just beautifully maintained, their history is impressive. Funded by a legacy left by Thomas Truesdale, a local attorney and buried in All Saints church where his monument claimed he was skilled in English laws and used them to make himself and others, honestly rich. He was generous to the poor in his lifetime, “for charity (which surpasses poetry) forbids that a person so deserving of praise should ever be forgot.”

They were designed by George Bashevi, a pupil of Sir John Soane, the architect of Cambridge’s Fitzwilliam Museum. They were built for 12 poor old men in 1833 and replaced the original. It is now Grade II listed n Tudor-Gothic style. Until the early 20th century they continued to be men only, regulated by strict rules including having to attend All Saints in their gowns, to be home by 9pm and “to take special care to avoid brawling, Quarrelling, Swearing and Drunkenness, and to behave themselves Peaceably, Soberly and Godly, suitable to the pious ends of their Founder.” Married Almsmen were allowed to have their wives visit, or attend upon them, but they were to “take diligent heed to avoid Clamours, Scolding, Vilifying and Reproachful Language, and whatsoever may disturb the peace and quiet of the Almshouse.”

These weathered angels are on the front facade: 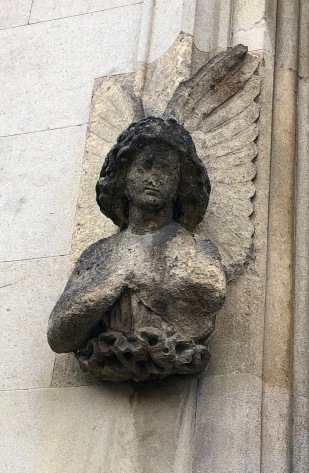 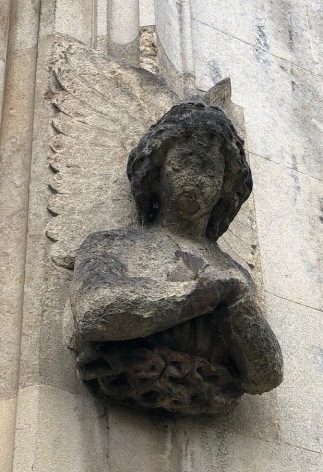 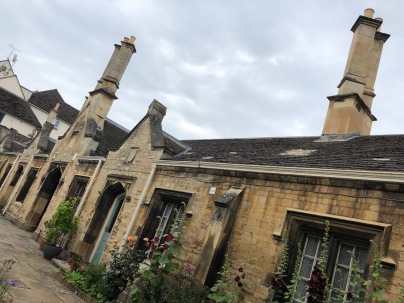 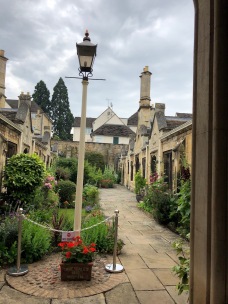