I discovered the coconut dancers of Bacup, Lancashire some years ago as part of the brilliant Unthank sisters’ documentary on English dancing. The annual easter event is a popular event, but has also attracted calls for the blackface to be removed as it is offensive to some groups. But as you can see from the performance, it is hard to establish who is being copied or insulted.

Comments under the clip claim that the blackface was not a feature in the 1960s, but others claim it mocks the sooty faces of the miners. The clogs suggest this is a local tradition; clogs are sometimes suggested as the source and/or inspiration for modern tap dancing.

A story I heard, possibly in the above documentary, is that the origins lie in Cornwall. The hands to their ears is about the problems of communicating underground. When the tin mines there closed in the 19th century, the miners took there skills around the world. Their Cornish pasties are alleged to be the inspiration for Mexican chimichangas. The Cornish were also present at many of the gold rushes, and their skills helped fuel the Industrial Revolution around the world. A suggestion has been made that the black face came from an African  shipwreck, survivors of which were accepted into a Cornish community. This may be the source of the coconuts as well. But as above, it seems to be a recent element, and as one contributor suggests, it may have been mimicking the local miners.

The skirts look a bit Roman, and they can often be seen on public clocks in the form of quarter jacks, the term may have evolved from a French origin. But the knickerbockers and stockings suggest the 18th century.

I showed the clip to a German visitor and he was astounded at the similarities with Tyrolean dance; this is further enhanced by the use of brass accompaniment. It fits in with what I’ve seen of the celebration of Carnival in Catholic areas of the Netherlands and Germany.  This could explain why it happens at Easter.

Finally, there is this mural, on the end of a terrace in Cardiff. Nobody seems to know why it is there, or if there is some significance in it, but as you can see, the hats are different. So, does this refer to the Bacup coconut dancers or is there a similar group somewhere else? Ideas and comments welcome. 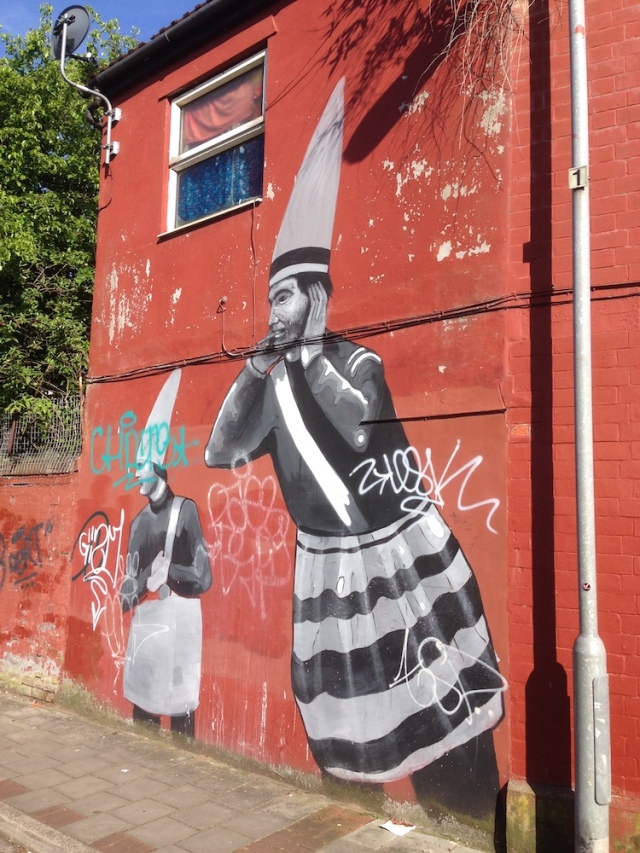