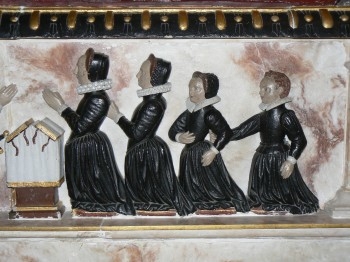 As a historian I have seen lots of memorials in churches in Britain and Europe, but this is very unusual – possibly unique.

Tudor monuments often show effigies of the parents recumbent above of their children lined up in order of size, praying for them. Sons are generally on the left, and daughters on the right. But the furtherest – ie youngest – on the right here is a short haired character, so a son, with its arm through that of his sister who was probably his twin. It even shows him at a slight distance from her, as if being led by her.

This looks like a blind boy, which in turn begs the question of why this monument is so unusual. Given how many stories there are of blind people in the Bible, of blind people being noted as being in need of alms etc, why does this memorial stand out?

Was blindness ignored in effigies or were blind people kept out of sight, so were – apart from professional beggars – invisible?